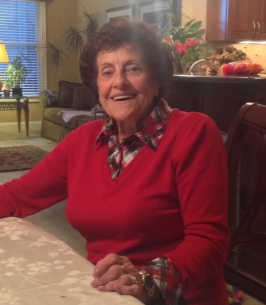 Ward, Bessie (Nee Casuto). Passed away on November 14, 2022, at the age of 98. Her 99th birthday was to be celebrated on December 16, 2022. Beloved wife of the late Vernon H. Ward. Loving mother of Michael L. Ward, Curtis (Andrea) Ward, and Leo (Tammy) Ward. Grandmother of Jeffery Ward, Stacey Ward, Kyle Ward, Brett Ward, and Autumn Richards. Dear sister of the late Rose Kadetz. Beloved aunt of the late David (Deanna) Kadetz. Bessie is also survived by four great grandchildren. Bessie was the youngest daughter of Charlie (Isaac) Casuto and Claire Taley. Preceded in death by her one sister and five brothers. Bessie lived her entire life in Western Hills. Vernon and Bessie were married on April 15, 1943. Bessie and Vernon enjoyed boating, traveling, playing cards with friends, and many evenings as members of the Cheviot Elks. Bessie will always be known by the many friends she made working with her sister Rose, and brother-in-law, Izzy Kadetz. Bessie worked at IZZY’s Restaurant for almost 50 years, finally retiring at the age of 92. Visitation Monday, November 21st from 10am until time of funeral service at 11am at Neidhard-Minges Funeral Home, 3155 Harrison Ave Cincinnati, OH 45211. Burial to follow at Bridgetown Cemetery. A celebration of life will follow at 3876 Beacon Woods Dr. from 1:30pm till 4:00pm.
Donations can be made to your favorite charity in Bessie’s name.