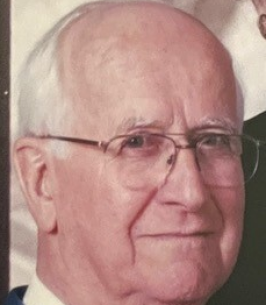 Harrison, Ohio —J. Laurent Geoffroy, 96, passed away peacefully on Sept. 27, 2022, with his family by his side. He was born on May 7, 1926 in Danville, Quebec, Canada, the son of Arcade and Simone Deshaies Geoffroy. At the young age of 9, dad won a singing contest. With cousin, Juliette Saucier’s encouragement, his singing and piano flourished. After receiving a baccalaureate of arts at the College Sacre Coeur in Arthabaska, PQ, he studied composition, piano, and organ at the Conservatoire National de Musique de Montreal, and choir direction at the Universite Laval, P.Q.
At age 27, dad married Cecile Brodeur of Danville, Quebec, in 1953. Jacinte, Lucie, and Francois, named after the Family Fatima, were born in Canada, and Jean-Marie in Madawaska, where the family was raised. Dad was the school music teacher and organist at St. Thomas Aquinas Church, later church organist and music director at the Cathedrale Immaculee Conception in Edmunston, N.B. until he was 83. At one point, dad was organist in two countries!
Laurent was predeceased by his parents, his wife Cecile Brodeur Geoffroy, and his brothers Marc Geoffroy and Jean Claude Geoffroy.
He is survived by his daughters Jacinte Lytle of Harrison, OH and Lucie Hatch of Saco, ME; sons Dr. Francois Geoffroy of Peoria, IL and Dr. Jean-Marie Geoffroy of Grayslake, IL; a brother Gilles Geoffroy, 9 grandchildren and 5 great grandchildren.
Family will receive friends from 10am until time of Funeral Mass at 11am at St. John the Baptist Church, 10010 Carolina Trace Rd, Harrison, Ohio, on Friday, Oct. 14th. Burial will be at a later date in Danville Cemetery, Danville, Quebec.