To share your memory on the wall of Roger Hartinger, sign in using one of the following options:

“If we all judged the same, dog shows would be pretty boring.” He was the antithesis of boring, having led one of the richest lives possible. With his wife, Paula, by his side for over seventy-years, he ... Read More
Roger Richard Hartinger, 86.

“If we all judged the same, dog shows would be pretty boring.” He was the antithesis of boring, having led one of the richest lives possible. With his wife, Paula, by his side for over seventy-years, he enjoyed an extraordinary life filled with incredible adventures all along the way. They raised four children and loved being a part of their larger connected families. They traveled the world visiting thirty-five countries, and spent forty-five years as internationally recognized Judges for the American Kennel Club. Roger was successful in his professional life as a soldier, police officer and Director of the Cincinnati Building Department. He will always be remembered for his life full of accomplishments and his deep love for family, friends and the dog show world. Roger left us on November 18, 2020 after a brief illness.

Roger was born in 1934 in Cincinnati, Ohio, the second son to Charles and Dorothy Hartinger. He enjoyed building and racing cars as a teenager, learned the construction trade from his father, graduated from Elder High School in 1952, and attended the Ohio Mechanics Institute to earn his Associate of Science degree in Industrial Engineering Technology in 1954. After a short career as a draftsman, he joined the Air Force for two years before serving as a police cadet for the Cincinnati Park Police before entering the Cincinnati Police Academy, where he graduated in January 1958. He remained with CPD until 1966. After a year as an insurance adjuster, he continued his career with the City of Cincinnati in the Housing and Building Department, working steadily up the ladder until retiring as the Assistant Supervisor of Buildings & Inspection in 1993.

Along with Paula and his family, Roger devoted himself to raising, showing and judging dogs. His knowledge was incomparable, and his devotion to the sport was immeasurable. Although he leaves a legacy that can never be surpassed, he also left the people who met and knew him countless memories of a man full of life, love and passion for so many things. His warm smile, quick wit, immeasurable kindness and affable nature will always be remembered by all who met and knew him. He served with sincerity and heartfelt joy in many leadership capacities in local and national dog show organizations. He and Paula were two of only a handful of judges approved for judging all breeds. Throughout all his travels he earned more than enough frequent flyer miles for a first-class seat on his final journey to Heaven.

His endless love for Paula and his family will forever be his greatest legacy. He always recognized her first. It was obvious she was his heart and inspiration. They will forever be remembered hand in hand or embracing wherever they were. Their house was always filled with the love and laughter of family, and while Roger was often content to be in the background, he made sure that every detail was attended to. Roger was a proud, intelligent and kind soul with boundless enthusiasm, integrity and love.

Roger leaves his wife, Paula (nee Bredestege), and their four children, R. Mark (Carolyn), Kathleen (Richard) Skalski, Paul (Lisa), David (Lee Ann), and former daughters-in-law Denise and Marilyn. He was grandfather to Allison Johnston, Andrew Hartinger, Brittany Picard, Chelsea Skalski, Lindsay Skalski, Kyle Skalski, Brittany Snell, Andrea Reinstatler, Kaitlin Hartinger, Julia Hartinger, Anastacia Hartinger, Jason Hartinger and Ryan Hartinger, Zachary Doran, Adam Doran, and seven great-grandchildren, Brenna, Keira, Jaxson, Caleb, Charlie, Agnes and Carter. He is preceded in death by his parents and his brother, Charles. He will be missed more than can be imagined by his family and all who were fortunate to have known him.

Funeral and mass will be live-streamed in consideration of COVID restrictions
https://venue.streamspot.com/event/MjQxNTk0NA==

In lieu of flowers please send remembrances and donations to St. Lawrence Church, Sisters of Notre Dame de Namur, and/or St. Ignatius Loyola Church. Paula would love for future masses to be said for him.
Read Less

Receive notifications about information and event scheduling for Roger

We encourage you to share your most beloved memories of Roger here, so that the family and other loved ones can always see it. You can upload cherished photographs, or share your favorite stories, and can even comment on those shared by others.

The City Of Cincinnati Building Department and Sue Gauche Cassel sent flowers to the family of Roger R. Hartinger.
Show you care by sending flowers

Posted Nov 24, 2020 at 05:56am
Sending prayers and thoughts. Always loved talking to Roger at Paul and Lisa’s gatherings...loved to hear about his travels and dog shows.....what a legacy he leaves behind - a life well lived and all the people he impacted. Rest In Peace. Sincere condolences to the family....love, Zecchino Family
Comment Share
Share via:

Posted Nov 24, 2020 at 01:02am
I was so deeply saddened to hear of Roger's passing. My thoughts are with you, Paula. He was one of the first people I remember meeting when I began my journey in dogs. Years may have passed between us crossing paths, but it never felt like it was a long time; we could just pick up where we left off. I always felt he was so genuinely glad to see me again. He helped me find the first dog in my current breed 35 years ago. He was a great dog man, a kind man, a loving husband and father. He was a judge whose opinion was always respected. If you asked him a question, you got a straight answer. The world has lost a great man.
Comment Share
Share via:
B

The City Of Cincinnati Building Department

Posted Nov 23, 2020 at 07:08pm
Our thoughts and prayers are with you. From The City of Cincinnati Building Department

The City Of Cincinnati Building Department purchased flowers for the family of Roger Hartinger. Send Flowers

Posted Nov 23, 2020 at 05:30pm
One of the kindest men in dog shows, I loved seeing he and Mrs. Paula hold hands and especially when he'd hold her purse. Totally adorable. He will be deeply missed. My condolences to his entire family.
Comment Share
Share via: 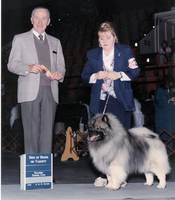