To share your memory on the wall of Peggy Dauderman, sign in using one of the following options:

She married Lloyd J. (Bud) Dauderman in 1968 in St. Louis, MO and they made their home for most of their lives together in Millstadt, IL. He preceded her in death on November 20, 2007.

In addition to her parents and husband, she was preceded in death by her first husband, William A. Bollmann; her brother, John P. Keppel Jr.; and her sister, Dorothy M (Keppel) Bilderback.

Peggy was born and raised in and around Sparta, IL. She was a graduate of Sparta High School, class of 1955. She drove a school bus for Millstadt School Corporation for 25+ years as well as coached various softball teams for the school and summer leagues. She was a long time member of the Millstadt Civic Club, holding various officer positions through the years. She helped run the Millstadt Food Pantry for many years and was very active in the Millstadt Historical Society. After her husband died, she moved to Rising Sun, IN to be closer to Shelley and Audrey.

There will be no visitation or funeral services, per her wishes.
Neidhard-Minges Funeral Home in Cincinnati, OH is in charge of arrangements.

Instead of flowers or cards, the family requests those in the Millstadt area wishing to express their sympathy make a donation to either the Millstadt Food Pantry or the Millstadt Historical Society in Peggy’s name. If you’re not near Millstadt, IL and would like honor Peggy, please consider a donation to the Lewy Body Dementia Association @ lbda.org in her name.
Read Less

Receive notifications about information and event scheduling for Peggy

You will receive any future notification messages.
No funeral details available.

We encourage you to share your most beloved memories of Peggy here, so that the family and other loved ones can always see it. You can upload cherished photographs, or share your favorite stories, and can even comment on those shared by others. 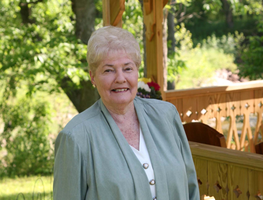