To share your memory on the wall of Richard "Dick" Minges, sign in using one of the following options:

Provide comfort for the family of Richard "Dick" Minges with a meaningful gesture of sympathy.

92, of Loveland, Colorado entered into eternal rest on August 17, 2019. He was born October 17, 1926 in Cincinnati, OH to the late Henry and Marie (Neidhard) Minges. The second of four sons. He enlisted in the United States Marine Corps in Cheviot, Ohio in 1944, completed boot camp at Camp Lejeune, NC, and was quickly dispatched to the Pacific Theatre during WW II as a heavy machine gun operator. Following the Surrender of Japan on September 2, 1945, he remained on post during the Occupation of Japan to help with reconstruction efforts.

On February 4, 1961 he married Marye Alice Youngren at Shrine of St. Anne Catholic Church in Arvada, Colorado. He and Marye Alice moved to Loveland in 1968 where they would raise their family.
Dick was a master carpenter and craftsman. Learning from, and working with his father, he developed residential properties in Ohio, Arizona, and Colorado. He was also proud to have worked on the construction of the Eisenhower Tunnel over the Continental Divide, The Stanley Hotel Renovation and the Larimer Square Renovation.

Dick enjoyed operating his apartment buildings over the years and making long lasting relationships with many of his tenants. In his later years, he could always be counted on to help and guide family, friends and neighbors with remodeling and home projects. He made friends wherever he journeyed, and enjoyed learning other’s life stories.

He was a longtime, and dedicated member of St. John the Evangelist Catholic Church since 1968. He enjoyed ushering, assisting with carpentry projects and was a familiar face at 11:00 am Mass for decades.

Dick was a simple man, with a contagious smile, who lived his life putting his faith and family first. He never declined a bowl of ice cream, a slice of pie or an opportunity to take a nap. Should there ever be an emergency, he always kept an adequate supply of candy bars under the seat of his pickup truck. He taught his children to appreciate and value the little things in life and to never take anything for granted.

He was preceded in death by his beloved wife of 57 years, Marye Alice Minges; his dear brothers, Jim and Bill Minges. Dick is survived by his forever grateful and loving children; Dianne (Al) Garcia of Denver, Mike (Gwen) Minges of Loveland, Debbie (Craig) Maki of Naples, FL and Bill (Sarah) Minges of Fishers, IN; his devoted little brother, Todd (Cheryl) Minges; his awesomely fantastic grandchildren; Christine and Tucker Garcia, Connor, Weston and Kiki Maki, Charlie and Rosie Minges and Sharmon (Craig) Eli and Brandon Noe. And great-grandchildren, Dakota, Denley, Dustyn, Mason and Caitlyn; the misfits of section 521 of old Mile High Stadium (since 1976), and a host of grateful nieces, nephews and friends

A Memorial Mass for Dick will be celebrated on Friday, September 20th at 10:00 am at St. John the Evangelist Catholic Church in Loveland. All are invited to a reception immediately following in St. John Hall. Interment will follow later in the day at Loveland Burial Park with USMC Honors. In May of 2012, Dick embarked on Honor Flight Northern Colorado. As a result of this extraordinary experience, we ask that, in lieu of flowers, memorial contributions be given in Dick’s name to High Plains Honor Flight, PO Box 363, Ault, CO 80610. Or online at: https://www.paypal.com/donate/?token=ac873vOqTOBTC2kVN0QPnhBGbei_AHSlf_sQz6aXP9j4WB0hi6jCwv1EsG2QP0aG1y9buW&country.x=US&locale.x=US

A soul so gentle ,kind and calm,
This treasure of a man,
My father-in-law.
Memories come and memories go,
but, the priceless memories I hold dear,
are a precious smoothing balm.
I will sadly miss him,
He was special and he was REAL.
But,earth hath no sorrow,
that Heaven cannot Heal .
Read Less

We encourage you to share your most beloved memories of Richard "Dick" here, so that the family and other loved ones can always see it. You can upload cherished photographs, or share your favorite stories, and can even comment on those shared by others. 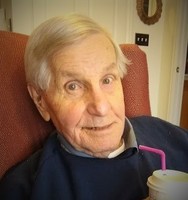