We're sorry but the candle you have selected is currenty in the process of being purchased or has just recently been purchased.

Please feel free to select another candle or check back in 15 minutes to see if the candle you have selected has been released for purchase.

We're sorry but there are no candles available for lighting.

You have already begun a candle purchase session. If you would like to continue with your current candle choice please click "Continue" otherwise please click "Select Another".

In Memory of
Geraldine
McIntosh
1927 - 2018
Click above to light a memorial candle.

The lighting of a Memorial Candle not only provides a gesture of sympathy and support to the immediate family during their time of need but also provides the gift of extending the Book of Memories for future generations.

In the event that there is an error
in the information presented,
please contact the funeral
home by clicking here. 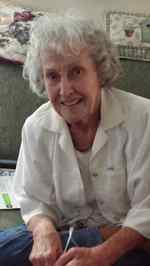 Geraldine (Gerry) McIntosh, of West Harrison, Indiana, passed away Wednesday, September 12th, 2018, at the age of 91. She was born on March 10th, 1927, to the late Bill and Avis Crowley. Gerry grew up in Henryville, Indiana and graduated from Henryville High School in 1945.

She opened and managed the Kentucky Fried Chicken restaurant, in Harrison, Ohio, in 1977, where she developed a love for Colonel Sanders and his original recipe. She also managed the seafood department at the Harrison Kroger until she retired in 1998.

In 2001, Gerry moved to the North Dearborn Village Retirement Apartments where she was involved in several operations at the Village Center: managing the gift shop, planting flowers, playing dominos, and more. She loved listening to classic country: Merle Haggard, Waylon Jennings, and Conway Twitty were some of her favorites. At age 18, she bought her first Harley Davidson motorcycle, and talked about riding again, up until the day she passed. She was a lover of her garden, Skyline chili, CNN, and her family.

A memorial service will be held at a later date.

This Book of Memories brings those affected by loss together by encouraging communication and self-expression. By giving friends and family a special place to tell their stories and express their feelings of loss, it helps them care for one another during a very difficult time. Click on any of the links to the right to access features or information within this memorial website.